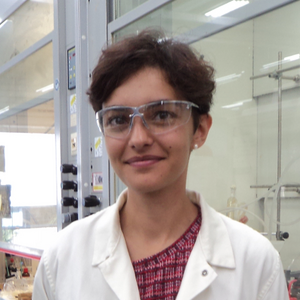 I have been trained in asymmetric catalysis, particularly using transition metals, both during my BSc and MSc degrees in Milan (2008–2013, Prof. Cesare Gennari group) and my PhD studies at the University of Oxford (2013–2017, Prof. Darren Dixon group, Marie Skłodowska-Curie ITN). In 2016, I carried out a biocatalysis secondment at Novartis R&D unit in Basel. After my PhD, I took up a position as a Quality Assurance officer in an Italian TEVA API production site, until in September 2018 I joined the laboratories of Prof. Antonio Echavarren at ICIQ as a Marie Skłodowska-Curie COFUND postdoctoral fellow.

My CV is characterized by a high intra-European and sectoral mobility, as well as by teaching (college tutor in Organic Chemistry in Oxford for two academic years) and supervising activities (three Master students and one visiting PhD student). This richness of experiences led me to mature the firm decision of pursuing a career in academia, uncovering innovative concepts in catalysis.

Organogold catalysis with bifunctional ligands for the activation of alkynes

The goal of this research project is to prepare and show the utility of a novel family of Au(I) complexes featuring bifunctional ligands, namely phosphines equipped with H-bond donor groups such as (thio)ureas and squaramides. We envision that these complexes can contribute to the solution of two long-standing issues in the field of gold(I) activation of alkyne substrates:

1 – The necessity of a silver co-catalyst, which has the drawback of mandating the use of an additional precious metal, while often negatively impacting selectivity.
2 – The realization of challenging enantioselective transformations of alkynes by placing the chiral information not on the ligand backbone, but on the counterion.

The successful implementation of this strategy has the potential to speed up the preparation and identification of competent catalytic systems for enantioselective reactions in general, and it is anticipated to translate easily to reactions catalyzed by different metals. Moreover, it would represent a conceptually new approach, at the intersection of metal catalysis, H-bonding organocatalysis and asymmetric counterion-directed catalysis.