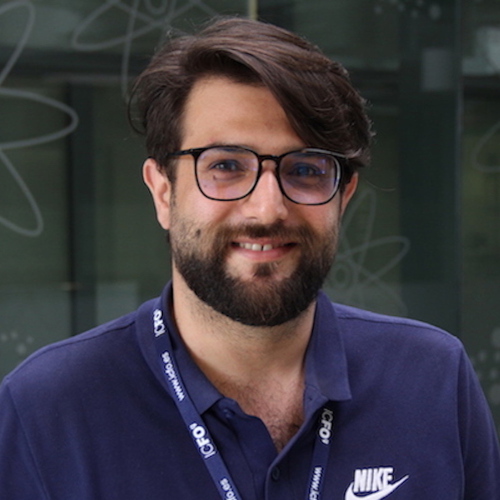 Nima Taghipour is a PREBIST Ph.D. fellow at ICFO-Institute of Photonics Sciences, working in Functional Optoelectronics Nanomaterials under the supervision of ICREA professor Gerasimos Konstantatos at ICFO. Prior to joining ICFO, Nima worked in the Department of Electronics Engineering and UNAM-National Nanotechnology Center in the Quantum Devices and Sensors group as a postgraduate research scholar at Bilkent University, Turkey. He received his B.Sc. in Electronics Engineering and his M.Sc. in Photonics Engineering-Nanophotonics in the same department at Tabriz university, Iran, He was admitted in the National Organization for Developments of Exceptional Talents, Iran. Nima’s research explores electronic and optical properties of the nanoscale materials including colloidal semiconductor quantum -dots, -wells and two-dimensional semiconductors. He uses these nanomaterials for light-harvesting (e.g., Photodetectors) and light-emitting (e.g., Lasers) applications. To date, Nima has authored more than 5 peer-reviewed journal articles, and some conference papers. As extracurricular activities, Nima is an amateur novel and short stories writer and script writer.

After being awarded the COFUND PREBIST Ph.D. fellowship under the Marie-Curie action on a proposal entitled “Optical Gain and Lasing in Infrared Colloidal Quantum Dots”, he joined ICFO to pursue his Ph.D. degree. His current research focuses on the lasing action of colloidal semiconductor quantum dot (CQDs) in the telecommunication band. The objective of his Ph.D. study is the demonstration of lasing action (e.g., optical gain and monolithic lasing) using functionalized infrared CQDs. Ultimately, he will establish electrically-driven lasers based on CQDs, which has remained unresolved due to the fundamental limitation gain performance of nanocrystals.

Colloidal semiconductor nanocrystals have emerged as an important class of materials for a wide range of applications including electronics and optoelectronics. Thanks to remarkable morphological and compositional tunability, along with colloid stability, solution-proceed semiconductor nanocrystals offer a versatile and promising material platform for use in an arbitrary substrate or integration into various matrices. The last two decades have witnessed the rise of colloidal nanocrystals, which have also recently shown great implications in commercial products. Colloidal quantum dots (CQDs) are used extensively in display technology for improved viewing performance including color accuracy, color gamut and reduction of power consumption (e.g., Samsung QLED TV 8K and Sony Triluminos). The industrial interests in CQDs has led to the rapid growth of the nanocrystal market, which was USD 300 millions in 2013 and exceeded USD 3.5 billions in 2020. According to the market forecast, it is expected to achieve USD 10.6 billions by 2025. At present, lighting and display technologies dominate the CQDs market. On the other hand, the market predictions also show that CQDs-based lasers, photodetectors and transistors will become appealing for industry in the near future.

Infrared lasers have shown significance in various optoelectronic applications including optical communications and CMOS technology. The current technology is based on the costly epitaxial growth of III-V semiconductors and Erbium-doped fibers. The first technique is not CMOS compatible and the second does not cover the full fiber transparency window.

Solution-proceed semiconductor nanocrystals can potentially be considered as a promising alternative to the current technology of infrared lasers. However, infrared CQDs laser, have suffered severely from poor gain performances which make them impractical for feasible daily-life applications. The fundamental limitations of the infrared CQDs as a gain medium arise from the high degeneracy of infrared QDs (e.g., 8-fold degenerate Pb-chalcogenide). Another challenge is unfavourable nonradiative recombinations including efficient surface trap states and Auger recombination, wherein the energy of the available gain-active species rapidly dissipates. Therefore, the low-threshold optical gain and lasing at room temperature, based on the infrared CQDs across the telecommunication band has remained a challenge. Generally, nanocrystals-based lasers employ ultrafast pulsed lasers (i.e., femtosecond and nanosecond) as a pump source. However, a practical laser device would require a continuous-wave laser as an optical pump source or a direct-current electrical injection.

In this thesis, we propose to develop and demonstrate novel energy efficient optical gain in the infrared CQDs based on the functionalization of the quantum dots including surface treatment and electronic doping. For this purpose, we propose to use different short chain inorganic ligands instead of long chain organic ligands, which are used to achieve colloid stability in the synthesis of conventional CQDs. In addition, we aim to explore engineered excitonic properties of low dimensional colloidal semiconductors by designing new heterostructured infrared semiconductor CQDs, and hybrid structure assemblies. These novel infrared CQDs will be integrated into optical cavities for the demonstration of the first infrared CQDs lasers. Ultimately, we will focus on electrically-pumping optical gain and lasing action in the infrared CQDs.