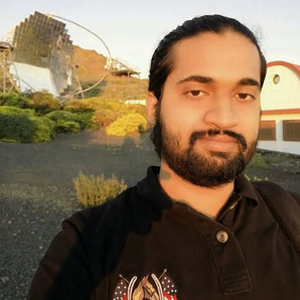 ● Primary and Secondary education (till 2008): 12 years in Pune, India, within the framework of Maharashtra State Board of Education. The medium of education was in English language
● Bachelors (BSc in Physics in 2011): I completed 3 years of Bachelors study from Fergusson College, Pune, India in Physics with a major in Astronomy and Astrophysics.
● Masters (MSc in Physics in 2015): I completed 2 years of Masters study from Department of Physics, University of Pune, Pune, India in Physics with specialization in Advanced Quantum Mechanics. My project thesis was on ‘Study of Chiral Anomalies using Path Integral Methods’.
● PhD (2015-17): I had joined a Joint Astronomy PhD program as a Junior Research Fellow at Indian Institute of Science, Bangalore, India. I completed 2 semesters of course work and later joined in a project on ‘Studying the modelling of a microquasar, to explain the High energy gamma-ray flux in its spectrum’. I only completed 2 years of the 5 years PhD program.
● PhD (2019-2024): Currency working as PREBIST fellow at IFAE, Barcelona in the MAGIC and CTA gamma-ray astronomy group in a project on ‘Observations of Active Galactic Nuclei in the gamma-ray band using the first telescope of CTA-North’

Imaging Atmospheric Cherenkov Telescopes (IACTs) are ground-based detectors for high energy gamma-rays by imaging Cherenkov radiation produced by a shower of relativistic particles passing through the atmosphere. These high energy gamma-rays are generally produced by either huge explosions or other high energy processes from sources inside our galaxy or beyond it. The Cherenkov Telescope Array (CTA) will be an observatory of arrays of IACTs on two sites in the two hemispheres. CTA-North is at the Roque de los Muchachos Observatory, La Palma, Canary Island and CTA-South is near the European Southern Observatory’s Paranal Observatory in the Atacama desert of Chile. The observatory will observe in the total energy range of 20 GeV to 300 TeV. The first telescope of the array is the Large-Sized Telescope dubbed LST-1, which is installed and running at the CTA-North site since 2018-19. The observatory will improve upon the sensitivity level, angular resolution and the field of view of current gamma-ray instruments

The prototype software pipeline of CTA for low-level data processing is ctapipe and the software repository for high level analysis of LST data is cta-lstchain. As part of the commissioning process of the telescope, I performed a study on the effect of the pulse shape of each detected Cherenkov shower event by the low level calibration done on it and compared to the Monte Carlo simulation of the shower, leading to improving the simulation model to be as close to the real shower as possible.

In the next stage of data analysis, the image obtained in the observations is cleaned and parameterized and along with the temporal and shower-directional parameters, it helps in estimating the arrival direction, energy of the observed event and how similar it is to a gamma-ray event. This is done with the help of Random Forest models trained with the Monte Carlo simulations of the Cherenkov shower particles, which are mostly protons and gamma-rays. I am studying this phase of the analysis, with using the data obtained during the 2 observation campaigns of Crab Nebula, the standard candle of gamma-ray observations, to further contribute in the upgradation of the analysis software repository.

In the higher stage of data analysis, the previous informations are used to generate source sky maps, differential and integral energy spectrum of the gamma-rays observed over the observable energy range. One of the software packages used to perform these analyses is an open-source Python package, gammapy, which is a prototype for CTA science tools. I am currently working with it to analyse the recent observations, to further help in developing the software packages, by understanding and comparing the spectrum of sources that have been amply studied by other instruments.