By Jenny KliverOctober 31, 2022CRG
No Comments

Researchers at the BIST centre CRG and Imperial College London have found a switch that regulates the activity of a gene that causes diabetes. The findings, published in Nature Cell Biology, highlight potential new vulnerabilities in the disease and could lead to the development of new therapeutic strategies. 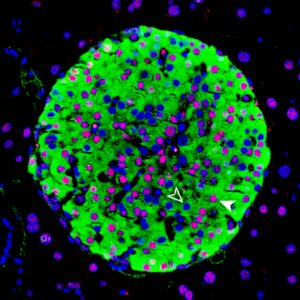 A mouse pancreatic islet, regions in the pancreas that contain insulin-secreting beta cells. The HASTER regulatory element has been knocked out, resulting in changes to beta cell function that cause diabetes. Credit: Miguel A Garriga/CRG

HNF1A is a gene that provides instructions for making a protein called hepatocyte nuclear factor-1 alpha. The protein is expressed in many tissues but is particularly important for the pancreas, where it plays a role in developing beta cells. Beta cells produce the hormone insulin, which regulate blood sugar levels.

Mutations in HNF1A cause cells to create a protein that doesn’t work normally, which in turn affects the function of beta cells. This results in individuals developing a disease known as maturity-onset diabetes of the young, where symptoms such as high blood sugar can appear before individuals reach the age of 30.

Though this disease accounts for just 1% of all types of diabetes, it is high in terms of absolute numbers due to the high prevalence of diabetes amongst the worldwide population (5-10%). HNF1A is also known to play a key role in the susceptibility for the more common form of the disease, type 2 diabetes, in concert with other genetic and non-genetic factors.

Understanding how the HNF1A gene is switched on or off in beta cells could have important implications for understanding why defects in this gene lead to diabetes, or how it could be harnessed to correct the underlying problem. Using a combination of mouse and human models, researchers have now focused on an enigmatic part of the genome near HNF1A that has a unique function that has not been described before. This DNA regulatory element works like as rheostat; if the HNF1A gene transcribes too much it dials it down, if the gene is slacking it dials it back up.

“We coined this a stabiliser, in contrast to other DNA regulatory elements such as enhancers, promoters and silencers, and call this particular element HASTER, for HNF1A stabiliser,” explains Jorge Ferrer, Senior Researcher at the CRG and Group Leader at CIBERDEM.

The vast majority of RNA molecules synthesised inside cells do not code for proteins. HASTER controls the production of a class of these RNA molecules known as long non-coding RNAS, (lncRNAS). “This is intriguing because there are tens of thousands of lncRNAs in the human genome, most of which have no known function. It is very likely that there are many lncRNAs in our genome with a similar function to HASTER. If so, they could play a significant role in human disease,” says Dr. Anthony Beucher, first author of the study.

The researchers showed that mutations in HASTER cause diabetes in mice. “This is important, because it proves that this type of element is critically important, the consequences of deleting HASTER are comparable to deleting HNF1A itself. HASTER could be a useful handle to manipulate HNF1A therapeutically” says Dr. Ferrer.

The study is an example of how studying the non-protein coding sequences in a genome can yield new ways to understand and treat disease. Just 1-2% of the human genome consists of protein-coding sequences. The remaining ‘dark matter’ is thought to include tens of thousands of regions that regulate gene expression.

By showing that changes to the function of gene regulatory elements such as HASTER can drastically change cell function akin to disrupting the gene itself, the researchers pave the way for future studies that explore the role of non-protein coding sequences in promoting disease.

“A lot more space in the human genome is devoted to regulating genes than to the genes themselves. In this study we have experimentally validated just one region to ascertain its function. It’s likely this is just the tip of the iceberg,” concludes Dr. Ferrer.

The study features on the cover of this month’s edition of Nature Cell Biology, and is included in a collection of articles from across Nature research journals that discuss recent technological advances in noncoding RNA biology.

“Although noncoding RNAs were initially considered to be degradation products of RNA turnover and metabolism, and were often neglected, increasing evidence has demonstrated their regulatory and functional roles in diverse cellular compartments and macromolecular structures and in a wide range of contexts spanning differentiation, disease and metabolism,” says an accompanying editorial in Nature Cell Biology.