The Institute for High Energy Physics (IFAE), a BIST centre, is part of the Cherenkov Telescope Array (CTA), a global initiative to address some of the greatest mysteries in astrophysics, whose so called “LST-1” (prototype Large Sized Telescope) has recently detected the Crab Puslar. This significant milestone shows that LST-1 is already operating at an extraordinarily high level. 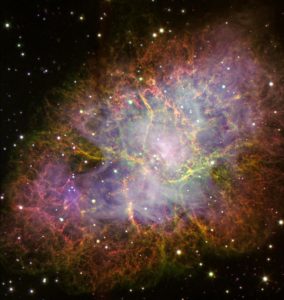 During eight observation nights between January and February 2020, the LST-1 (prototype Large-Sized Telescope), observed the Crab Pulsar, the neutron star at the centre of the Crab Nebula. The telescope, whose steering committee is led by Professor Manel Martinez (IFAE, a BIST centre), is being commissioned on the island of La Palma in the Canary Islands. It was conducting engineering runs to verify the telescope performance and adjust operating parameters when it saw the Crab Puslar.

Pulsars are very rapid rotating and strongly magnetised neutron stars that emit light in the form of two beams, which can be observed from Earth only when passing our line of sight. While detecting the strong and steady emission or outbursts of gamma-ray sources with Imaging Atmospheric Cherenkov Telescopes (IACTs) has become routine, pulsars are much more challenging to detect due to their weak signals and the typical dominance of the foreground gamma-ray signal from the surrounding nebulae. Despite hundreds of observation hours by IACTs around the globe, only four pulsars emitting signals in the very high-energy gamma-ray regime have been discovered so far. Now that the LST-1 has shown that it can detect the Crab Pulsar, it joins the group of telescopes capable of detecting gamma-ray pulsars, validating the timestamping system and the low-energy performance of the telescope.

“This milestone shows us that the LST-1 is already performing at an extraordinary level, detecting a challenging source in record time,” says Masahiro Teshima, Director of the Max- Planck-Institute for Physics in Munich and Principal Investigator of the LST. “It’s exciting to imagine what we’ll be able to achieve when the telescope is fully commissioned and operational.”

More about the LST

The Large-Sized Telescope (LST) is one of three types of telescope to be built to cover CTA’s full energy range (20 GeV to 300 TeV). LSTs arranged at the centre of both the northern and southern hemisphere arrays will cover the low-energy sensitivity between 20 and 150 GeV. Each LST is a giant 23 metre diameter telescope with a mirror area of about 400 square metres and a fine pixelised camera made of 1855 light sensors capable of detecting individual photons with high efficiency. Although the LST stands 45 metres tall and weighs around 100 tonnes, it is extremely nimble, with the ability to re-position within 20 seconds to capture brief, low-energy gamma-ray signals. Both the fast re-positioning speed and the low energy threshold provided by the LSTs are critical for CTA’s studies of transient gamma-ray sources in our own Galaxy and for the study of active galactic nuclei and gamma-ray bursts at high redshift.

The Cherenkov Telescope Array (CTA) is a global initiative whose consortium is composed of more than 1500 members from 31 countries. Its goal is to build the world’s largest and most sensitive high-energy gamma-ray observatory with tens of telescopes planned on two sites: one in the northern hemisphere on the island of La Palma, Spain, and the other in the southern hemisphere near Paranal, Chile. CTA will be the foremost global observatory for very high-energy gamma-ray astronomy over the next decade and beyond and will be the first ground-based gamma-ray astronomy observatory open to the world-wide astronomical and particle physics communities. CTA will address some of the greatest mysteries in astrophysics, detecting gamma rays with an unprecedented sensitivity and expanding the cosmic source catalogue tenfold. CTA is a unique, ambitious large-scale infrastructure that will expand observations up to a region of the spectrum that has never been seen, opening an entirely new window to our Universe.