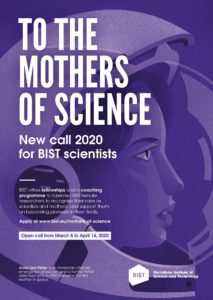 Coinciding with International Women’s Day (March 8th) the Barcelona Institute of Science and Technology (BIST) has opened the call for the second edition of the ‘To the Mothers of Science‘ programme, whose objective is to support researchers who are mothers and working towards positions of scientific leadership.

The initiative will award 10 grants this year, each of which includes a salary top-up of 400€ per month, for one year. Applicants must be either working in one of the seven BIST centres, or have a contract with an external organization with a connection to a BIST centre. The grants also include a coaching programme for each recipient and for finalists in the selection process. Winners will be selected by a panel of external specialists who will take into consideration candidates’ scientific excellence and their potential to reach leadership positions. All researchers who are mothers and hold a position as a PhD student, Postdoctoral Fellow, Associate Researcher, or similar are encouraged to apply.

“In this year’s edition, we will expand the contents of the coaching programme, as this was one of the most highly valued aspects in the first edition.” explains Nuria Bayó, Head of Academic Programmes at BIST. “Researchers and specialists both recognize that reinforcing self-confidence and managing stress are two key aspects needed to advance successfully in the scientific career, which is highly competitive. Women must often overcome invisible barriers related to the education they received as girls or to the social pressure around motherhood.” adds Bayó.

Connecting with one another and discussing similar challenges was also very highly valued by the first edition’s awardees. “The most important thing was how my perspective about my career was influenced. Seeing other mothers taking their careers forward towards leadership positions, I decided I would do a postdoc after my PhD. […] before participating in the programme, I had planned to move outside of academia to a position with a lighter intellectual load and fewer demands.” Explains an awardee from the first edition.

Of the 11 researchers who were awarded in the first edition of the ‘To the Mother of Science’ programme, seven have already made significant progress in their scientific careers, having reached coordination or senior research positions, both in public research centres and private companies.

The 2020 call of the programme will remain open until April 14th. This initiative is part of the BIST Women in Science programme whose objective is to reach gender balance within the BIST Community and, especially, in leadership positions. Women make up 44% of the BIST community, yet only occupy 18% of group leader positions (although some progress has been made since 2018 when the percentage was 15%). The BIST Women in Science programme includes activities such as the BIST Trobada de 100tífiques, co-organized with FCRI, which brought together more than 200 researchers on January 30th to reflect on science and education, and to prepare the talks they delivered in schools throughout Catalonia on the International Day of Women and Girls in Science (February 11th).