Attoscience gets element specific at ICFO

By Jenny KliverNovember 14, 2017ICFO
No Comments 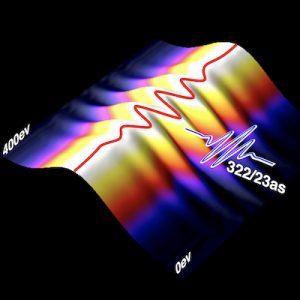 An ICFO study, in collaboration with researchers from Italy, Australia and Germany confirms the generation of isolated attosecond water-window SXR pulses.

Attosecond-duration pulses are the shortest controlled bursts of light (10-18 s). They are so short that they are able to freeze-frame the motion of electrons themselves, thus reaching the ultimate time scale in which it is possible to observe the processes that govern the chemical or functional properties of materials. The use such an “electron camera” is virtually infinite as it can be implemented to take snapshots of the dynamic evolution of a solar cell while it absorbs sun light and produces electricity, pinpoint the bottlenecks that appear when electrons move in smaller and “narrower” electronic circuits, or even how these elements can cause chemical bond forming and breaking, and ultimately trigger biological changes.

When you take snapshots of an action, the first thing that comes to your mind is to find out how fast your camera is. Although a tricky question to ask, it is one of the most difficult questions to answer, simply because we cannot use an even faster camera to determine the speed of the former. Fortunately enough, the answer to this question was addressed and solved in the context of modern laser physics. This field of study came up with an ingenious method that involves laser pulses nearing the ultimate limit of one oscillation of the electric field, which is now defined as isolated attosecond pulses.

In a recent study published in Physics Review X, ICFO researchers Seth L. Cousin, Nicola Di Palo, Bárbara Buades, Stephan M. Teichmann, led by ICREA Prof. at ICFO Jens Biegert, in collaboration with researchers from Politecnico Milano, the Australian University and the University of Freiburg, have confirmed the generation of the first isolated attosecond water–window SXR pulse, setting an upper bound on the pulse duration of 322 as.

In their study, they were able to measure isolated attosecond pulses in the water window soft X-ray regime which, for the first time, combine ultrafast temporal resolution with the element selectivity of soft X-rays. They were able to generate these pulses with unprecedentedly high photon energy in the soft X-ray range up to 350 eV which is suﬃciently high to fully cover the K-shell absorption edge of carbon at 284 eV for spectroscopic applications. Thus, with this it was possible to pinpoint the flow of electrons and material excitations with atomic site specificity inside a complex material.

The results of this study pave the way towards a new era of attosecond science in which sub-femtosecond temporal resolution is combined with element selectivity by reaching the fundamental absorption edges of important constituents of matter such as carbon.