On July 23 and 24 a group of creators gathered by the Fundació Èpica La Fura dels Baus presented the result of two weeks of intensive cocreation. The “Survival vs Resilience” workshop started with experts from ICN2, ICFO, BIST, UOC, HLRS and UB who shared some scientific knowledge with the creators. Two weeks later, a complex and exciting performance surprised the attendees who were able to discuss the contents of the event with scientists and creators. Graphene was one of the main topics thanks to previous contacts with GraphCAT, a project led by ICN2, ICFO and BIST.

An informal conversation at a BIST Conference two years ago became an opportunity to collaborate. A member of Fundació Èpica casually interacted with a BIST officer and a member of ICN2 Communication Department, sparkling a mutual interest that became a performance presented last weekend. The science developed at the BIST centres is used as an inspiring starting point to create a scenic arts experiment led by members of la Fura dels Baus, an internationally renowned theatrical company.

The need to disseminate GraphCAT, the project funded with FEDER funds and coordinated by ICN2, ICFO and BIST to bring graphene closer to Catalan industry, was the perfect excuse to start the discussion. After numerous interactions, which led to publishing two video interviews, the “Survival vs Resilience” workshop became real.

A group of 30 creators interacted with scientists such as Dr Jose de la Cruz, who developed his PhD at the ICN2 and is now working at the INBRAIN Neurotechnologies spin off, Dr Victoria Puig, Senior Researcher at the ICN2 Advanced Electronic Materials and Devices Group, Àlex Argemí, ICN2 Head of Marketing and Communication, and Lorenzo Orsini, PhD Student at the ICFO Quantum Nano-Optoelectronics Research Group. They all shared scientific content with the creators who used it to create a compelling script. 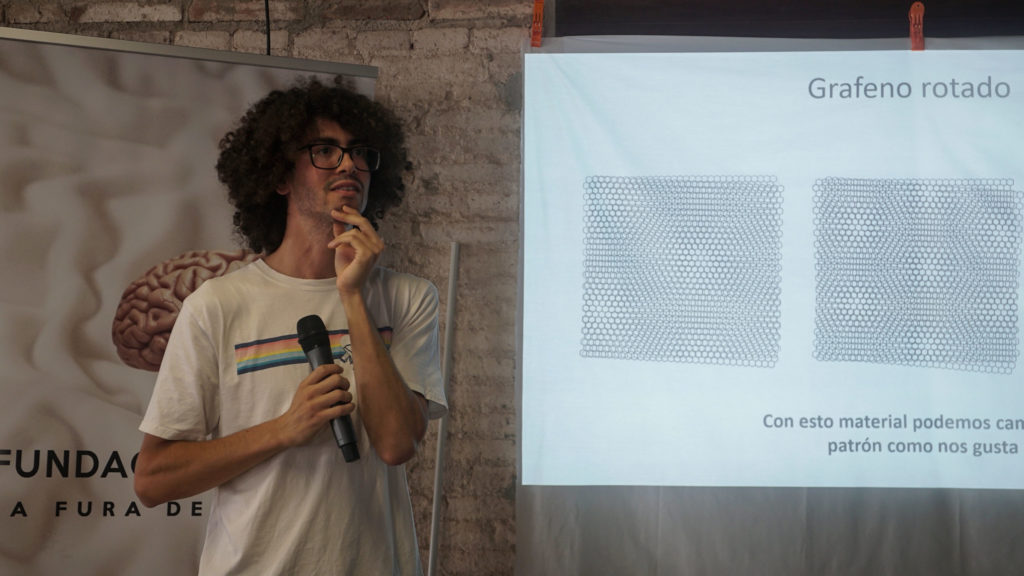 The performance included four interlinked elements tackling different concepts. The first one was based on graphene itself and its thermal and electronic properties, with attendees becoming electrons on a superconductor. The second one reflected on how brain-computer interfaces could bring beneficial biomedical applications, but also entail ethical and moral risks. Thanks to such technologies one person overcame her physical and mental boundaries in an experiment that ended terribly wrong at the purest Fura dels Baus style. The third element discussed how fake news are able to shape popular opinion and manipulate, with two persons presented as terrible criminals and judged guilty by attendees when the truth was they had done nothing wrong. The final part of the event developed the concept of personality and how it can change and be altered.

ICN2, ICFO and BIST shared the science of graphene with the creative team with the support of GraphCAT. UOC involved experts to reflect on the relevance of fake news. Researchers from High-Performance Computing Center Stuttgart (HLRS) and UB shared knowledge on personality and how it is built in the brain. Finally, Fundació Èpica is an experimental branch of Fura dels Baus who explores new realities through artistic experiences. They are truly devoted to including scientific knowledge in their artistic workshops, as proven by previous experiences with institutions such as IGTP.

All four elements of the “Survival vs Resilience” workshop were mixed in a disturbing but at the same time beautiful experience that triggered many questions at the final part of the event, were scientists and creators interacted with the public. The discussion ranged from the creative project to the science behind it and how science communication can take innovative forms when different worlds such as academic science and scenic arts clash together.

The final feeling was that this experience was constructive and useful. All involved actors will work together to make new and deeper experiences possible.