Ada Colau to the #100tífiques: “I encourage and urge you to make yourself seen, because we need female role-models, both as individuals and as a community.”

• The Mayor of Barcelona opened the #100tífiques debate and networking meet-up (‘trobada de debat i networking’) this morning. This initiative is organised by FCRI and BIST to recognise and make visible those contributions made to science by women.

• The programme included a round table on how to increase women’s influence in science and society. Speakers highlighted the need to change attitudes and personal perceptions as well as current leadership models in institutions and society.

• This week, on June 8, 9, and 11, BIST and the Barcelona Education Consortium have also organised three meetings (called “Agoras”) between female scientists and primary school children. Topics of discussions include COVID-19, Food, and Exoplanets and Space.

Barcelona, June 10, 2021. The Barcelona Institute of Science and Technology (BIST) and the Fundació Catalana per a la Recerca i la Innovació (FCRi) have organised the second #100tífiques Meet-up this year, within the framework of the 2021 City and Science Biennial (Biennal Ciutat i Ciència 2021). The event aims to recognise and make visible those contributions made to science by women researchers and technologists. The #100tífiques programme, run by the FCRi and BIST since 2019, brings hundreds of researchers and technologists (489 in the last edition) to schools every year, on the International Day of Women and Girls in Science. The initiative runs across Catalonia to bring research closer to schools and to promote female role-models to primary and secondary school students.

Mayor Ada Colau attended today’s meeting, where she addressed the participants directly, encouraging them to talk about their research in both public and private settings, “because we need benchmarks, both for individuals and for this community, to build a more inclusive city and society”. The mayor highlighted that globally, women still only make up 30% of all people engaged in research, and asked, “how many brilliant women are we missing?”

In her speech, Colau emphasised the important contributions the city of Barcelona is already making to science (a recent report by Nature places Barcelona as the first city for scientific production in Spain, the 9th in Europe and the 40th in the world), and the City Council’s commitment to making this contribution much more visible in the public, national, and international promotion of the city. The mayor thanked the researchers for their contributions to science and encouraged them to continue: “We want more women like you doing science, but also leading innovative companies, holding university professorships, and leading major innovation projects.”

The event also included a round table entitled ‘Increasing the influence of women in science’, moderated by researcher Núria Montserrat, ICREA Professor at the Institute for Bioengineering of Catalonia (IBEC) and Commissioner of the Biennial. Speakers Gina Aran, CEO of Inginium, Mónica Roca, President of the Barcelona Chamber of Commerce, Anke Kleff, Psychologist and Member of the IBEC Human Resources Department, and Mónica Garcés, Philosopher and Professor at the UOC, participated in the discussions. They talked about how the recognition and influence of women’s contributions to research and innovation can be increased, from personal, institutional, and social perspectives, both in the public and private spheres. They emphasised the importance of communication to explain our work but also listen to and value the work of our women colleagues. But above all, they highlighted the need to change leadership models, to avoid copying obsolete models or simply creating “parallel” departments for “women’s” subjects.

In addition to the #100tífiques event, BIST and the Barcelona Education Consortium have also organised three meetings (called “Àgoras“) between female scientists and primary school children this week as part of the Biennial. IBEC’s Núria Montserrat presented “COVID-19” at the Parc Científic de Barcelona (PCB) on June 8 with researchers Mariona Nadal (IRB Barcelona), Mirabai Cuenca Ardura (CRG), Júlia Vergara (IRTA), and Maria Soler (ICN2). On June 9, the topic of “Food” was presented by Zoila Babot (CRAG) with researchers Laura Botigué (CRAG), Marta Terré (IRTA), and Marta Balsells (IRTA). And finally, Ana Montaner of IECC will be presenting about “Exoplanets and Space” at Plaça Joan Coromines (CCCB-Raval) with researchers Laia Cardiel (IFAE), Laura Cabayol (IFAE), and Anna Ferré-Mateu (IECC). Some photos of the first two meetings can be browsed in the gallery below. 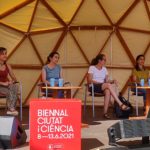 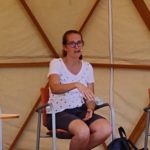 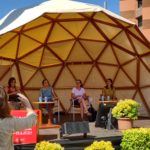 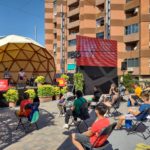 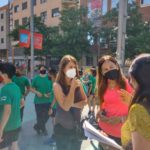 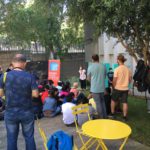 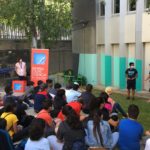 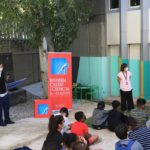 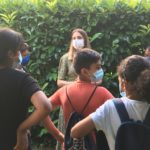 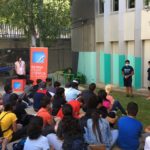 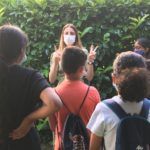 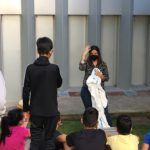