By Jenny KliverOctober 19, 2022ICN2
No Comments

In a paper published in ‘JACS’, an alternative method to synthesize complex metal-organic framework (MOFs), by assembling prefabricated “pores”, is proposed. The approach envisioned by a team of researchers from the Supramolecular NanoChemistry and Materials Group at the BIST centre ICN2 provides greater control over the materials produced and their specific properties. 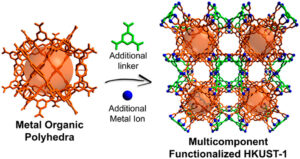 Material scientists have found an excellent tool in Reticular Chemistry to create new crystalline solid-state structures. As opposed to traditional synthetic methods, it provides higher control over the final structure, which is obtained by linking together molecular building blocks by strong bonds.

With this chemistry, materials designed to have predetermined architectures, compositions, and properties have been obtained, as is the case of a variety of porous networks, such as metal-organic frameworks (MOFs) and covalent organic frameworks (COFs). By combining various metal ions and organic linkers into MOFs, more complex structures are produced, whose superior functionalities can be harnessed in practical applications, such gas storage, water harvesting, and catalysis.

A team of researchers led by ICREA Prof. Daniel Maspoch and Dr. Arnau Carné-Sanchez, group leader and senior researcher in the ICN2 Supramolecular NanoChemistry and Materials Group, respectively, proposes a new approach for producing multicomponent MOFs, which provides an additional and useful instrument to material scientists. This study, which involved other members of Prof. Maspoch’s group, as well as colleagues from the Materials Science Institute of Madrid (ICMM-CSIC), the Autonomous University of Madrid, the Materials Science Institute of Barcelona (ICMAB-CSIC) and the ALBA Synchrotron, has been published in the Journal of the American Chemical Society (JACS).

The proposed method is based on the observation that MOFs, which are obtained by assembling basic molecular building blocks, can also be seen as the result of connecting higher order structures, such as metal-organic polyhedra (MOPs), either directly or through additional, small blocks. Therefore, by replacing some of those higher order structures with analogous (but conveniently different) units, new materials having the same architecture as the original one but with distinct properties can be produced.

In practice, the authors chose an already known MOF (specifically, KHUST-1) and identified in its structure a repetitive “pore” unit (in this case, a cuboctahedral MOP), which is connected to the others by other small building blocks. They then prefabricated similar “pore” units (MOPs) that included different components and used them as starting points to build a new material, by connecting them through metallic ions and organic linkers. As the authors explain in the paper, this technique is successful since the prefabricated MOPs dictate the arrangement of the other components around them, hence determining the final architecture.

This method provides increased flexibility in designing multicomponent materials, which can be built through the co-assembly of prefabricated pores with small molecular organic linkers and metal ions. A greater control over the synthesis and the final result allows tuning the properties of a material according to the specific application for which it is being developed.