• The FCRI and BIST are organising the fourth edition of the #100tífiques initiative, which aims to highlight the contributions made to science by women, and to create new women role models for girls and boys.

• The Meet-up will officially launch this edition of the programme, which will include talks by women scientists on February 11 in more than 400 schools throughout Catalonia. 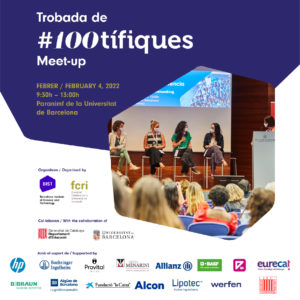 Barcelona, January 26, 2022. The #100tífiques Meet-up, to be held Friday February 4 from 9:30h to 13h in the University of Barcelona’s auditorium, will officially kick off the fourth edition of the #100tífiques initiative. Organised by the Fundació Catalana per a la Recerca i la Innovació (FCRI) and the Barcelona Institute of Science and Technology (BIST), and in collaboration with the Catalan Government’s Department of Education, the programme aims to bring science to schools, highlighting the contributions of women researchers and technologists, and creating new women role models to inspire girls and boys.

The programme will bring together 450 women scientists from the public and private sectors, who will give in-person or online talks to more than 400 schools throughout Catalonia on February 11, the International Day of Women and Girls in Science. The purpose of the February 4th Meet-up is to foster networking among women researchers and technologists, and to publicly recognise the contributions made by women to the advancement of science.

This recognition is underlined by the participation of the President of Catalan Parliament, Laura Borràs, the Catalan Minister for Research and Universities and President of the FCRI, Gemma Geis, and the Catalan Minister for Education, Josep González-Cambray. They will open the event together with Professor Andreu Mas-Colell, BIST President, and Joan Guardia, Rector of the University of Barcelona.

The event will include a keynote lecture on gender and language by Carme Junyent, Professor of Linguistics at the University of Barcelona, and a round table discussion with Núria Salan, Professor at ESEIAAT (UPC) and President of the Catalan Society of Technology, Meritxell Bautista, CEO of Fibracat TV and social activist, and moderated by journalist Núria Jar. The all-women Hypatia I expedition, which reproduces the conditions of a hypothetical research station on the planet Mars, will also be presented. This project, located at the Mars Desert Research Station (MDRS) in Utah (USA), is made up exclusively of women researchers and science communicators from Catalonia.

The #100tífiques programme has grown from 115 women researchers and 103 schools in its first edition in 2019 to more than 450 women scientists and technologists and more than 400 schools in its third (held exclusively online in 2021) and fourth editions. This growth has led to a five-fold multiplication of the programme’s social impact; In 2019, the #100tífiques talks reached 6,500 girls and boys, while in 2021 the audience exceeded 34,000 students from the 6th grade of primary school to 1st year of ESO, a figure that is expected to be equalled in this year’s edition.

Find the full programme of the #100tífiques Meet-up on February 4 here.