100tífiques: changing the stereotypes that keep girls from pursuing science

The Barcelona Institute of Science and Technology (BIST) brings 100 researchers and technologists together today for a training and networking session at the Parc Científic de Barcelona (PCB) with the objective of helping the researchers prepare talks that they will deliver on the International Day of Women and Girls in Science (February 11) and to build community among them. 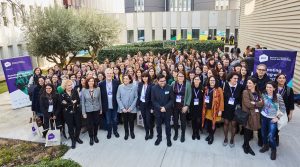 The Barcelona Institute of Science and Technology (BIST) gathers over 100 scientists in the Antoni Caparrós Auditorium of the Parc Científic de Barcelona (PCB) today for a networking meeting and training session. The event aims to give visibility to the contributions made by women to science and to promote female researchers as role models for future generations. The event is part of the Barcelona City and Science Biennial and includes the participation of the Mayor of Barcelona, Ada Colau, the Councilor of the Generalitat, Elsa Artadi, the General Director of Innovation, Research and Digital Culture of the Ministry of Education, Mar Camacho, the Culture Commissioner of the Barcelona City Council, Joan Subirats, and the President of the Institut Català de la Dona, Núria Balada.

The main goal of the meet-up is to provide the tools needed for the researchers to prepare inspiring talks they will give to school chidren on the international day of women and girls in science (February 11) all across Catalonia through the 100tífiques event organized jointly by the Barcelona Institute of Science and Technology (BIST) and the Fundació Catalana per a la Recerca i la Innovació (FCRi). In addition to this, the event will provide a space for building a community feeling among female researchers in Catalonia and to discuss the barriers young children face when deciding whether to purse science as a career.

The full press release can be found through the links below, in Catalan and Spanish.